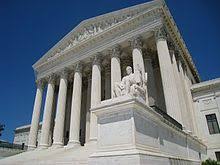 On April 14, 2018, the United States Supreme Court invalidated a provision of U.S. immigration law requiring that legal immigrants convicted of violent crimes be deported even if they have lived in the U.S. for decades. The particular provision in question before the Court pertained to people who are convicted of certain crimes that present a “substantial risk of force against the person or property of another.” The case involved an immigrant from the Philippines, James Garcia Dimaya, who became a legal U.S. resident when he was a young teenager. Later, Dimaya was convicted of first-degree burglary in California. An immigration judge ordered him deported, declaring that the burglary was “an act of violence.”

Dimaya appealed, pointing out that the home that Dimaya had broken into was vacant, and therefore there was no physical threat to anyone. Appeals went to the Supreme Court, which ruled that the term “crime of violence” in the statute was ill-defined. Experts asserted, however, that there is little doubt that those convicted of serious violent crimes, such as assault, rape or murder still face deportation.